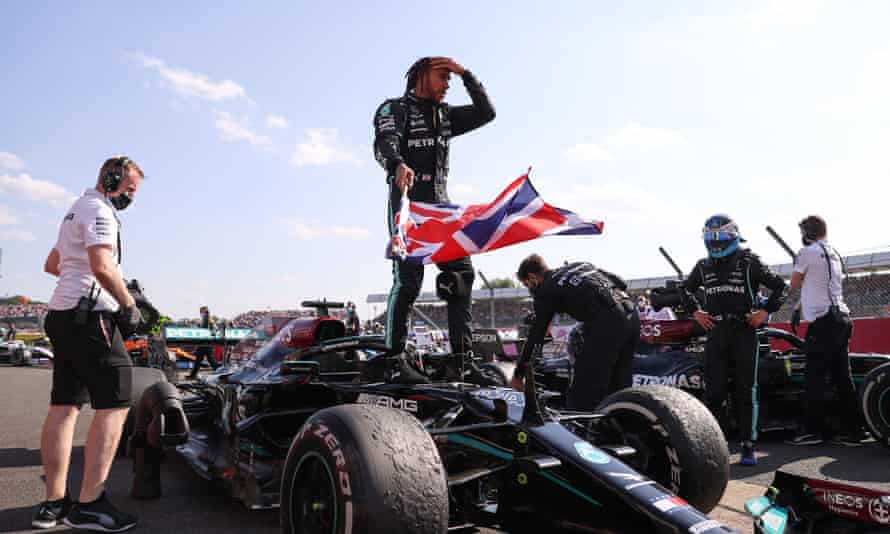 Lewis Hamilton receives online racist abuse following dramatic British GP win on Sunday; Formula 1, the FIA and Mercedes condemn the abuse and call for action to be taken against those responsible; seven-time Formula 1 world champion is a high-profile voice in the fight against racism

The 36-year-old recovered from a 10-second time penalty for a huge first-lap crash with title rival Max Verstappen on a dramatic afternoon.

Racist messages including ‘monkey emojis’ and other racial slurs were sent as replies to a post by the Mercedes team on Instagram celebrating Hamilton’s success.

Facebook – the parent company of Instagram – told Sky Sports News: “The racist abuse directed at Lewis Hamilton during and after the British Grand Prix is unacceptable and we’ve removed a number of comments from Instagram.

“In addition to our work to remove comments and accounts that repeatedly break our rules, there are safety features available, including Comment Filters and Message Controls, which can mean no one has to see this type of abuse.

“No single thing will fix this challenge overnight but we’re committed to the work to keep our community safe from abuse.”

Formula 1, the FIA and Mercedes released a joint statement condemning the abuse and called for action to be taken against those responsible.

It read: “During, and after, yesterday’s British Grand Prix, Lewis Hamilton was subjected to multiple instances of racist abuse on social media following an in-race collision.

“Formula 1, The FIA and Mercedes-AMG Petronas F1 Team condemn this behavior in the strongest possible terms.

“These people have no place in our sport and we urge that those responsible should be held accountable for their actions.

“Formula 1, the FIA, the drivers and the teams are working to build a more diverse and inclusive sport, and such unacceptable instances of online abuse must be highlighted and eliminated.”

A Red Bull statement said: “While we may be fierce rivals on-track, we are all united against racism.

“We condemn racist abuse of any kind towards our team, our competitors and our fans. As a team, we are disgusted and saddened to witness the racist abuse Lewis endured yesterday on social media after the collision with Max.

“There is never any excuse for it, there is certainly no place for it in our sport and those responsible should be held accountable.”

A McLaren statement read: “McLaren stands with Formula 1, the FIA, and our fellow teams and drivers in condemning the deplorable racist abuse towards Lewis Hamilton.

“Racism must be driven out of our sport, and it’s our shared responsibility to unite and eliminate it.”

even-time world champion Hamilton has consistently been outspoken against racial inequality throughout his career, most recently voicing support for Bukayo Saka, Marcus Rashford and Jadon Sancho, after they missed penalties in the Euro 2020 final and as a result were subjected to a torrent of racist abuse on social media.

Hamilton has been a high-profile voice in the fight against racism and called for tangible action to create a more diverse and inclusive society.