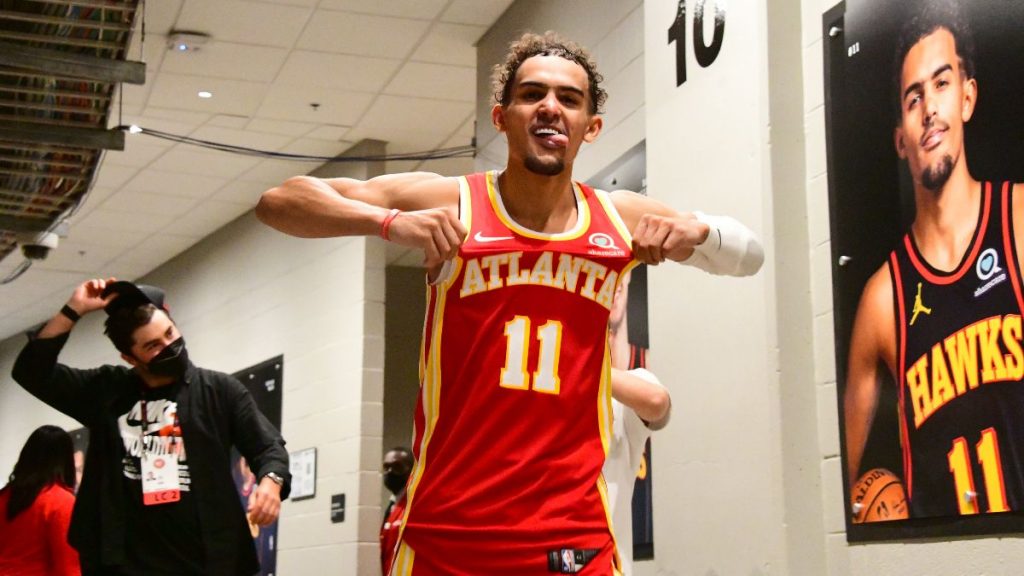 The Atlanta Hawks and the Philadelphia 76ers provided fans with an exciting playoff game on Monday night as the lower-seeded team picked up the 103-100 win they needed to even the series at 2-2.

After getting off to a slow start, Hawks All-Star Trae Young finished the win with a game-high 25 points to go along with 18 assists and four rebounds. Atlanta needed their star player to be dominant and he was just that in a game that the Hawks had to have.

On the other side, the 76ers saw all five of their starters score in double figures but, in the end, it was not enough to get the job done. As a result, the setting will shift back to Philadelphia on Wednesday night for what is now, essentially, a best-of-three series.

Here are three key takeaways from the game:

1. Hawks use 18-point comeback to tie the series

After stealing Game 1 on the road, the Hawks lost the next two games by double digits, and it seemed like the Sixers had figured things out. That was reinforced when the Sixers quickly took control in Game 4 and built an 18-point lead in the second quarter, before going into the halftime break up by 13.

The Hawks were in serious trouble at that point, and it honestly wouldn’t have been surprising if the Sixers had cruised to victory. But the Hawks weren’t ready to go home, and slowly but surely worked their way back into the game. It wasn’t always pretty, but they showed the kind of effort and fight that would make any team proud.

However, with just a few minutes remaining in the fourth quarter, they still trailed by four and needed a response. That’s when Trae Young stepped up and used his playmaking and scoring to key a 7-0 run that put the Hawks in front for good. Now, the series is all tied up at 2-2, and the Hawks still have a chance to advance to their first Eastern Conference finals since 2015.

2. Young takes over down the stretch

Trae Young had a bad start to this game. The Sixers’ decision to make Ben Simmons the primary defender continued to bother him, and he missed his first five shots before going to the bench and putting a giant wrap on his shoulder. At that point, things were not looking good for the Hawks.

But NBA games are long, and neither Young nor the Hawks gave up. While he never really did get his shot going, Young went into facilitation mode and did a terrific job getting his teammates involved. He finished with 18 assists to set a new playoff career-high, became the first player since Tim Hardaway to have 25 points and 18 assists in a playoff game and is now the youngest player in NBA history to have 18 assists in a playoff game. 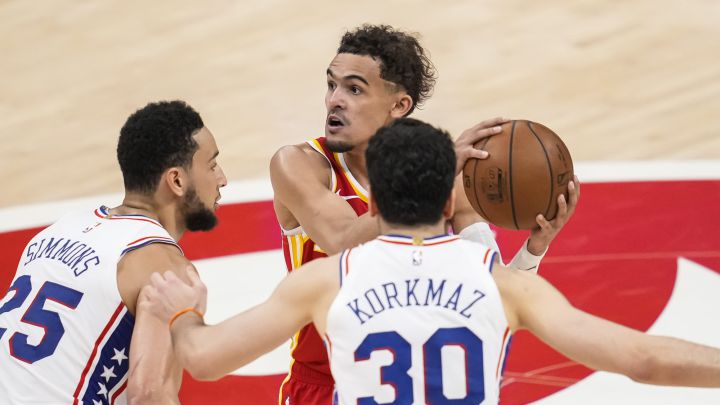 In particular, Young was tremendous down the stretch. He either scored or assisted on the Hawks’ final 15 points, and was instrumental in a 7-0 run to take the lead in the final minutes. This pass to Collins, where he went up and drew multiple defenders before whipping a wraparound pass out to the corner, was just outrageous.

The fact that Young is now 23-for-59 from the field in the last three games is cause for concern for the Hawks, who do need his scoring. If he continues to struggle from the field, he’ll need to lean on that playmaking to keep the Hawks’ offense running.

In the first half, Joel Embiid quietly made his way to the locker room. That’s always a cause for concern, but even more so these days since he’s playing with a partially torn meniscus. After a few minutes, however, he returned to the bench and soon checked back into the game. It seemed like things were all good, or at least as good as they can be in the circumstances.

That changed in the second half. Embiid looked nothing like the dominant force he had been for the entire series. He was settling for jumpers, flopping around trying to draw foul calls and generally doing almost nothing on the offensive end. To his credit, he was still a presence on the other end of the floor, and a monster on the glass, but the Sixers desperately need his scoring, and he just didn’t have it on Monday. 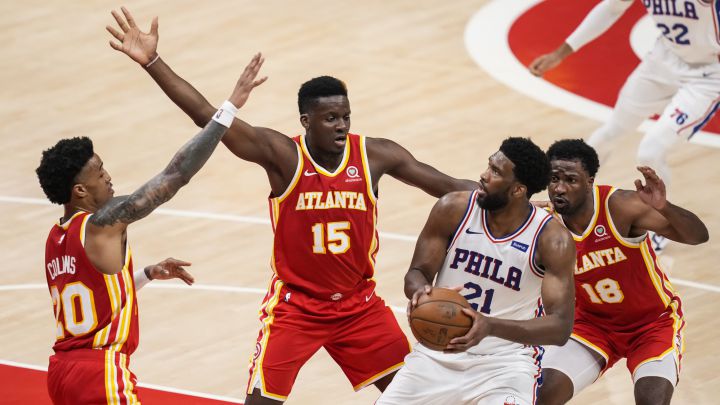 He went 0-for-12 from the field in the second half and missed a pretty makeable layup with 8.8 seconds left that would have given the Sixers the lead. All told, he finished with 17 points and 21 rebounds on 4-for-20 from the field. This was his worst shooting performance in a playoff game since 2018, when he went 2-for-11 against the Miami Heat.

The mysterious trip to the locker room, coupled with his disastrous play after he came back, make it easy to wonder if there’s something up with his knee. After the game, 76ers coach Doc Rivers said he knew Embiid had gone to the locker room during the game, but didn’t have any further details on his status.

With the series now tied, 2-2, this becomes the major storyline moving forward. The Sixers are pretty clearly the better team when Embiid is healthy and playing well, but without him at or near his best, this is a much more even matchup.