Another tanker explosion happened along Suleja road in Niger state this morning. This accident occured barely 24 hours after the petrol tanker explosion on Otedola bridge in Lagos that claimed the lives of 9 persons including a minor.

The fire accident occurred at Mallam Karo, along Minna-Suleja Road involving a collision between a truck and a fuel tanker.

The spokesperson of the Federal Road Safety Corps, Mr. Bisi Kazeem, said the crash happened in the morning.

He added that men of fire service and officials of the FRSC were on the ground to put off the fire as the vehicles are burning.

Five persons have been confirmed injured in the early morning head-on collision between the fuel tanker and the trailer and the victims have been taken to the hospital.

“No life was lost,” Kazeem said.

The tanker had no visible number plate and was laden with Kerosene, a highly flammable hydrocarbon liquid.

It is also noted that the fuel tanker belongs to Conoil.

“The cause of the crash was speed violation, leading to loss of control,” Kazeem added.

He said that the nature of the crash serious, being a multiple accident.

“Victims have been taken to the General Hospital Suleja, as they were attended to by FRSC officials and other security agents such as men of the Nigerian Police Force and Fire Service officials from Suleja.

“The vehicles caught fire after a head-on collusion,” he submitted. 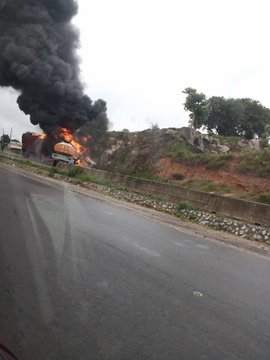 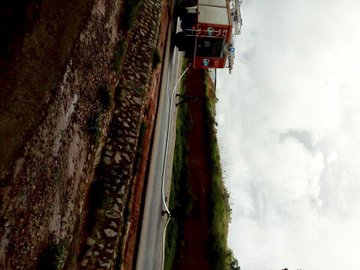 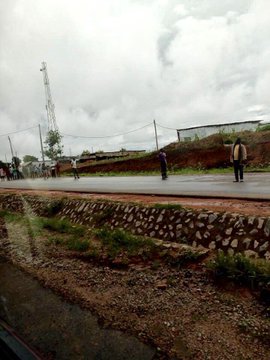 An accident just occurred between a fuel tanker and a trailer at Maje along Minna-Suleja road.

Incase you’re planning to ply that route now, it is advisable you delay your movement a bit as firefighters have just arrived the scene.