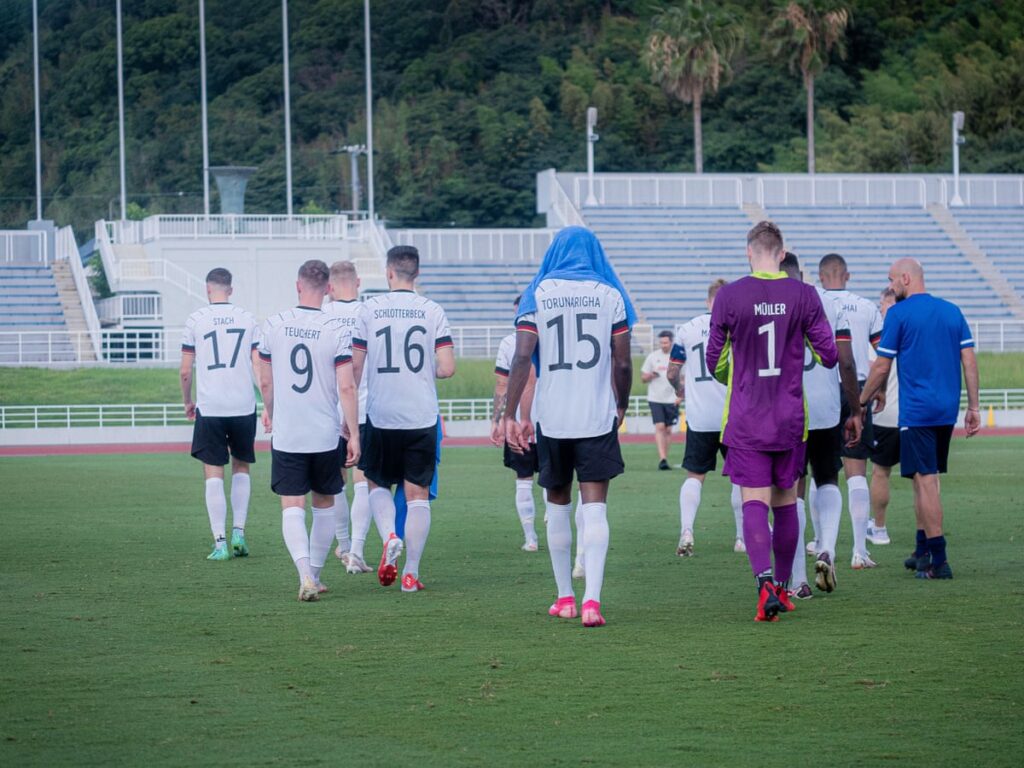 The Germany Olympics team’s friendly match against Honduras came to an abrupt end on Saturday when the players walked off the field because of alleged racist abuse directed at Jordan Torunarigha.

Stefan Kuntz’s side faced the Central American nation in preparation for the 2020 Olympics, which begin next week.

The teams were tied at 1-1, with Germany equalizer thanks to a goal from Felix Uduokhai, before the alleged incident took place.

The players walked off the field with five minutes left to play.

The Germany Olympics football team’s Twitter account claimed that the players decided to leave because defender Torunarigha had been racially insulted.

“The game had to be stopped five minutes before the end when the score was 1-1. After our player Jordan Torunarigha was racially insulted, the German team left the field together,” the short update read.

The DFB has confirmed to that the alleged insult was made by one of the Honduras players.

There were no spectators at the match, which was a behind-closed-doors game played in Wakayama, Japan.

Speaking after the match, Kuntz commented: “In terms of the game, it was very high level. In the third period I was wondering what was going on with Jordan. Five minutes before the end of the game there was a scuffle.

“I ran to Jordan because I saw his gestures. He was getting terribly upset. He said that he had been racially insulted for the second time. We decided to leave the pitch because it was against our values.

“The whole Honduras squad came over to the bench and apologized. That ended the issue for us and Jordan.”

“His (Torunarigha’s) team-mates picked him up straight away, gave him a hug for the first few minutes. He was very upset. But you could tell that he was happy to be with us. At the end, we even joked a bit again. “The team is doing a great job. Of course, it helps when you see your colleagues supporting you. It’s also a strong statement from Jordan to say, “That’s enough”.

Honduras, meanwhile, have released a statement via social media, insisting that the incident was a “misunderstanding”.

They wrote: “Game ended at 87 [minutes] by abandonment due to the fact that a German player alleged an alleged racist insult on the part of the Honduran national team.

“On the subject, the Nacional de Honduras expresses that the situation was the result of a misunderstanding on the pitch.”

Torunarigha has suffered racist abuse before

Torunarigha has regrettably had to endure racist abuse in the past.

In February last year, the Hertha Berlin defender was targeted by Schalke fans during a DFB-Pokal encounter, with the Bundesliga side subsequently fined €50,000 for the incident by the DFB.

Other recent cases of racism in football

Racism in football has been a prominent issue this summer.

Three England players – Jadon Sancho, Marcus Rashford and Bukayo Saka – were all victims of racist abuse on social media after missing penalties in the Euro 2020 final defeat against Italy.

Each player published a statement on social media during the week in which they spoke out against the discrimination.

“There is no place for racism or hate of any kind in football or in any area of society and to the majority of people coming together to call out the people sending these messages, by taking action and reporting these comments to the police and by driving out the hate by being kind to one another, we will win,” Saka wrote.

Like Saka, Rashford admitted he expected to receive racist messages and comments following his miss, saying: “I’ve grown into a sport where I expect to read things written about myself.

“Whether it be the color of my skin, where I grew up or, most recently, how I decide to spend my time off the pitch I can take critique of my performance all day long, my penalty was not good enough, it should have gone in but I will never apologize for who I am and where I came from.”

Racism on social media has been a recurring problem throughout the last year, with many players highlighting the abuse they have received, prompting English football to boycott Twitter, Facebook and Instagram in an attempt to force them to tackle the issue.